Hunger in Front of Schwartz’s 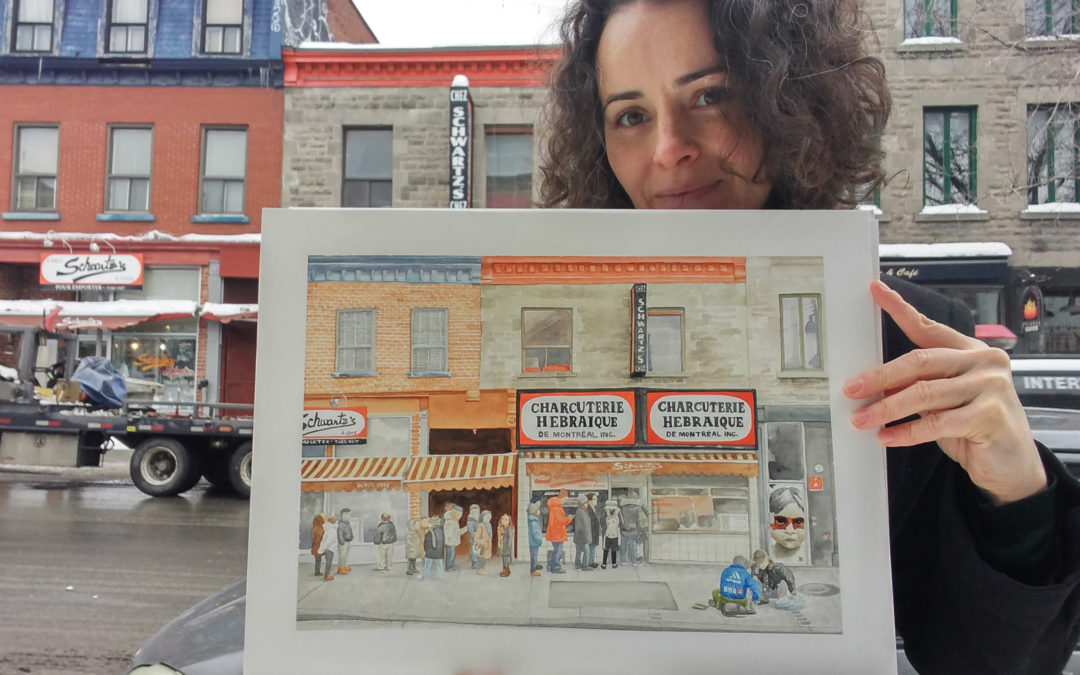 Well, for those of us who have gone to at least one couple’s counselling session, we know that no one is responsible for how I feel other than me, myself, and I. So I really ought to say I feel uncomfortable when I see someone asking for change on the street. I suspect I am not alone in this sentiment.

I used to avert my eyes and hurry past. Sometimes I would hand over a bit of cash, all the while warring with the desire to help someone obviously in need and a concern that all I am doing is providing funds to feed unsavoury habits. It is not just my own opinions I contended with either. There is our society’s generally negative view of the homeless and panhandlers along with a lifetime of friends and family whispering, ‘Don’t do that!’ when I move to place a coin in the extended hand, hat, cup, or other offering dish held out in my general direction.

I hate the feeling of wanting to help but not knowing what to do.

I began confronting this issue about 5 years ago with the decision to simply hand over cash when I had some on me. That move to free my actions eased some of the discomfort. When a friend was there to question why, or to reinforce the afore mentioned negative societal views on beggars, I would say this is my money to do with as I wish. When pressed further about how I feel about handing over cash to someone who is likely to use it to buy cigarettes, alcohol, or worse, I would say I have no way to be certain how the money will be used so have chosen to give without judgement.

With repetition and time the act of giving spare change to beggars has become more natural and less fraught with quandary. If I do not have cash on me I have learned to look the person in the eyes and at least share a smile before I pass by.

Even so, a few dollars and a bit of kindness is not going to get someone off the streets. Something which has never been more clear to me than during my past few months here in Montreal where, despite the harsh winter gripped tightly around us, there are still people begging for change, wrapped in blankets and shivering on the sidewalks.

There was a long line of people waiting to get inside queued to the left, all oranges, browns, and tans, with a heavy anchor of blue sitting on the sidewalk to the right. It was as if my internal struggle with the plight of beggars had been carefully arranged in a living tableau by the invisible hands of fate and happenstance. 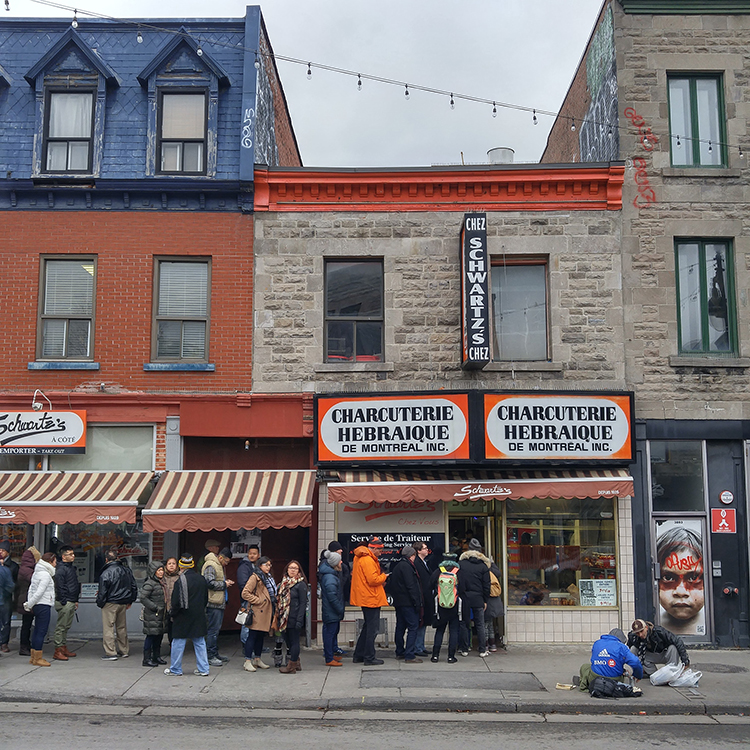 I took a picture. Then walked home pondering the difference of privilege between the words hungry and hunger.

The image stayed fixed in my mind throughout the holiday season as I spent time with family and friends. A lot of that time centred around food, a two-faced indulgent holiday activity which I am sure many of you can sympathize with. By the end of December I knew I was going to paint the scene.

The palette came first, so simple, oranges, browns, tans, and blue. I wonder now if my association of Montreal with the colour orange is due to this painting? Or is it due to the plethora of rust-coloured brick used in the city’s architecture? 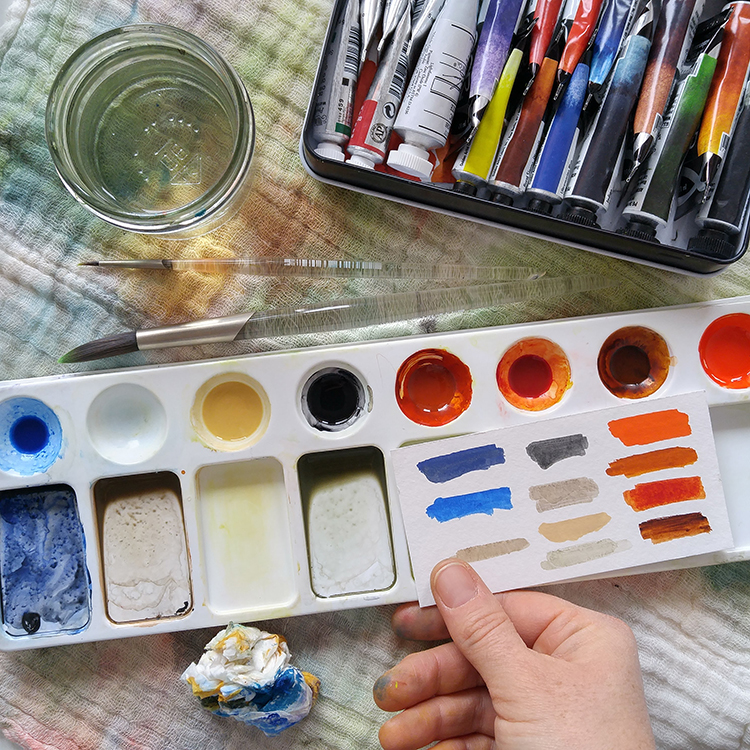 Then I cropped the image, mapped out the scale and placed reference points on my paper, sketched the details, and began painting the stones and brickwork.

To be quite honest I am not a fan of recreating typography, the signage was a chore, and there is a lot of it. I broke the signs up into 4 tasks and made sure I had plenty of other sections to paint as a reward in between. 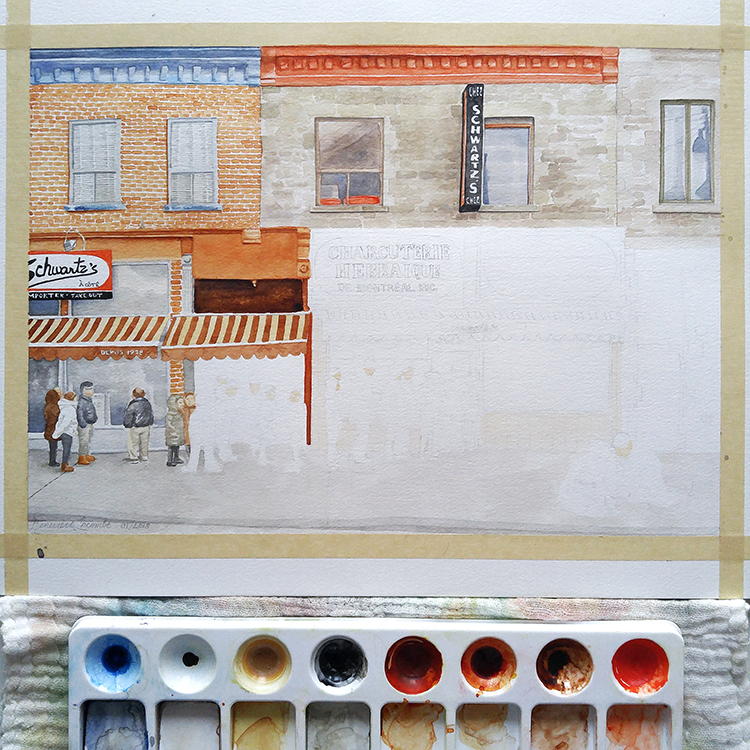 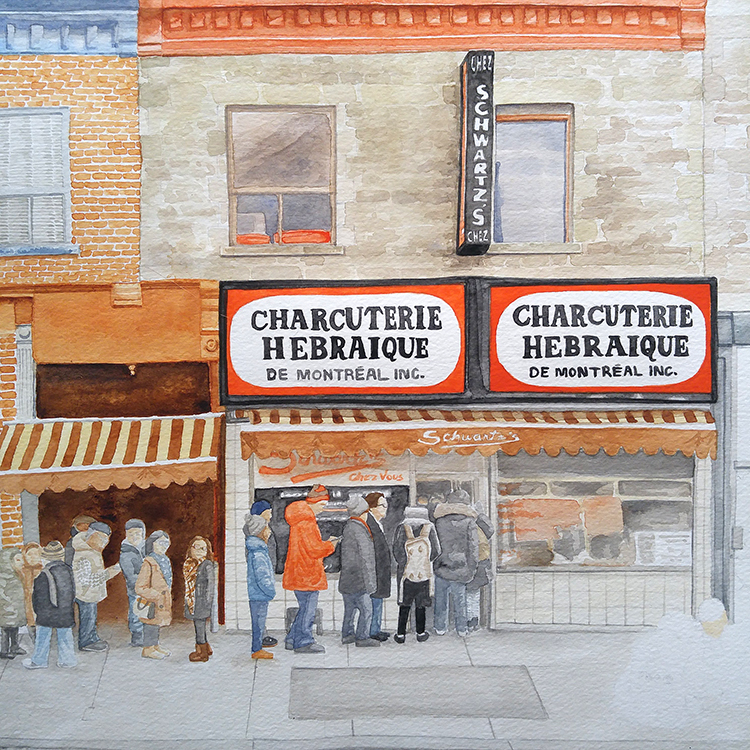 I left that bottom right hand corner for last, like the punctuation at the end of a sentence.

I lived with this piece dominating my studio and my thoughts for 2 weeks. Some sessions were long, spent with back hunched over my desk and hand locked around my favourite brush for hours without a break for lunch. A couple of days I only made the time for quick visits even if my mind was still sitting next to it.

I often wondered what I title I would give it, which drew my thoughts into a minefield of social issues, which served to dredge up my feelings of discomfort and helplessness around the homeless and desperate, which lead me back to the day I stood in front of Schwartz’s and took this picture, which would bring me full circle to wondering what I should title this painting. Around and around I went.

And then it was finished.

The painting remained untitled, carefully set aside, and I moved on to the next piece. Until this happened: 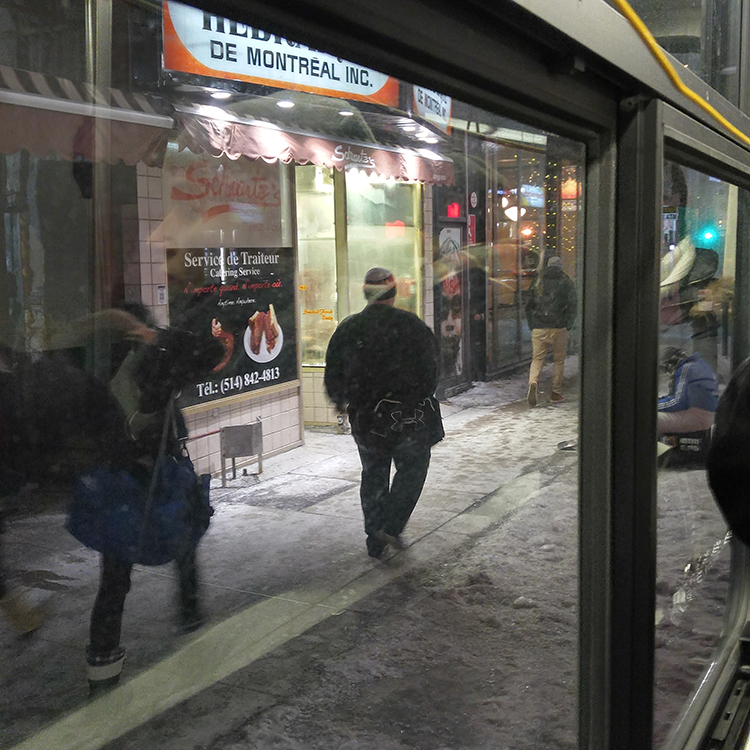 It is Thursday, January 25th, I am on the 55, bussing my way home on a cold night. A pool of blue on the sidewalk catches my eye as we pull up to a stop and I think to myself, ‘No! It’s so cold outside!’ I dig out my phone at the last second and snap a picture just barely catching the seated figure at the edge of the frame.

Art models are paid for their time spent posing at the whim of painters and sculptors. I know this is not quite the same thing, but the individual in the blue Bank of Montreal jacket is a big part of my painting despite the relatively small real estate allotted to their presence. A connection has formed and I need to find a way to help even if it is just some spare change. 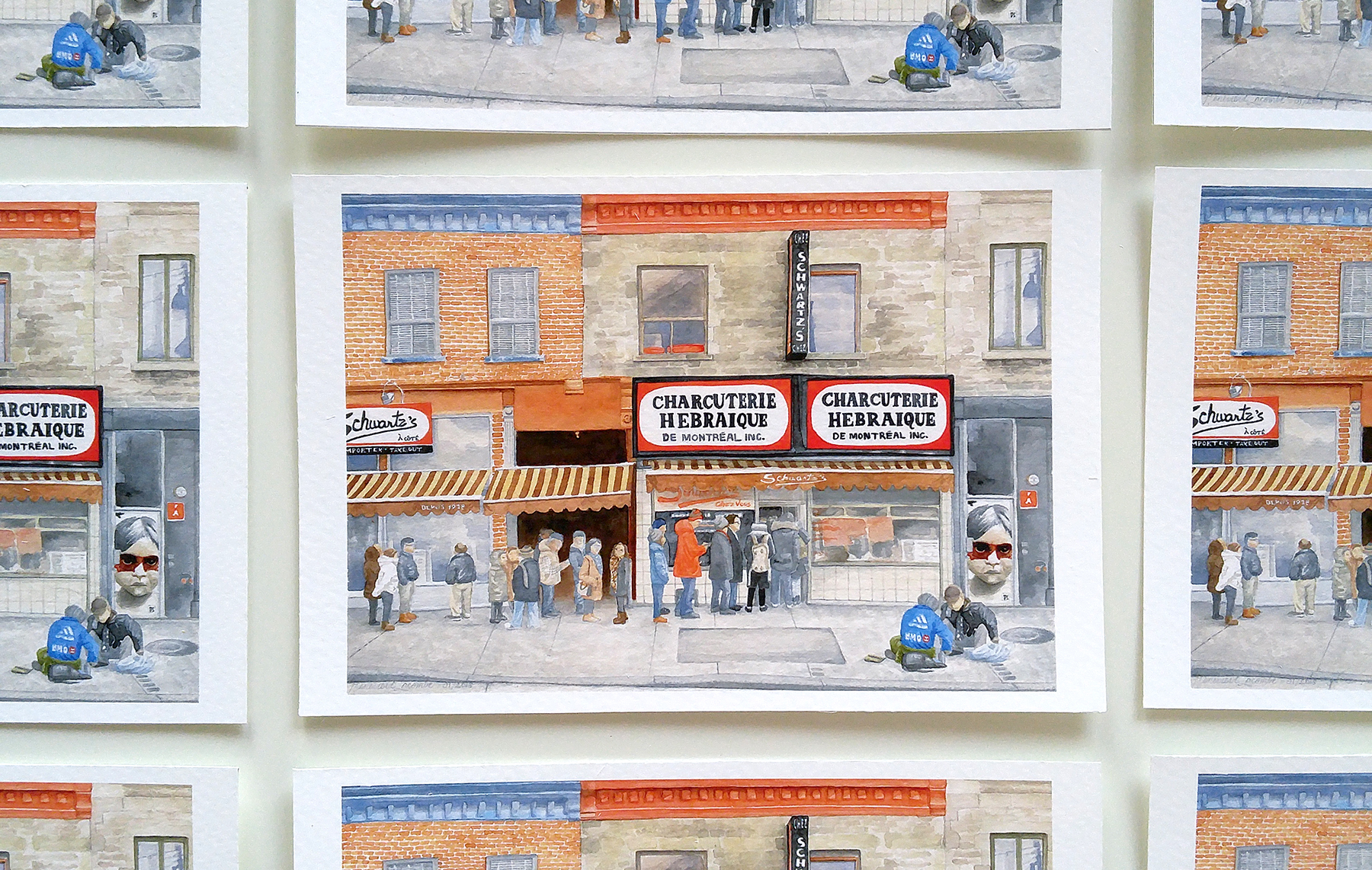 I decide to make postcard prints of this piece and set one aside to give to the beggar thinking, hoping, they have someone they would like to send a message to. Then I say to myself, ‘Why just one?’ I print out 10, package them in plastic sleeves because it is snowing, there is slush and ice on the ground, and this is someone who spends a lot of time outside. Maybe the other 9 can be given to passerby in return for a donation.

Friday night I keep a look out for the blue jacket. It’s there. I hop off the bus and walk up to the man sitting on a plastic crate, signs written in black sharpie on cardboard at his feet. I am all nerves, but manage to introduce myself. He is a fellow traveller, stuck in Montreal due to health problems, begging for change at this location for about a year now. His eyes are unclear, face marked with scabs, and the word meth makes its way past his lips.

I pull out a postcard and explain about how I painted it from a photograph I took last November, and since I believe he is the person in my painting I thought he would like a copy.

His eyes light up, he shakes my hand hello, takes the postcard and thanks me. Then I say I have more, perhaps he could sell them or ask for donations and use the card as a gift. He hesitates, does not want to make money from them and would rather give them away. I smile, and say they are his to do as he wishes, but repeat that I think he should ask for a donation in return. He says he will need more cardboard for a new sign.

Walking away my mind fills with a dozen scenarios of what could go wrong. I remind myself of my decision to give without judgement.

I had found the title:

Pocket change in itself may not go very far to improve anyone’s life, but the work we do inside to change how we see the people around us can work miracles.

This postcard is now available in my brand new shop. I am researching local charities which feed the homeless in Montreal and will be donating $1 from each Hungry Postcard sold. As soon as I find the right one I will include the organization’s information in the shop item’s description.

Wishing you all the best, 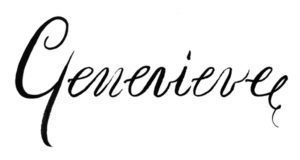