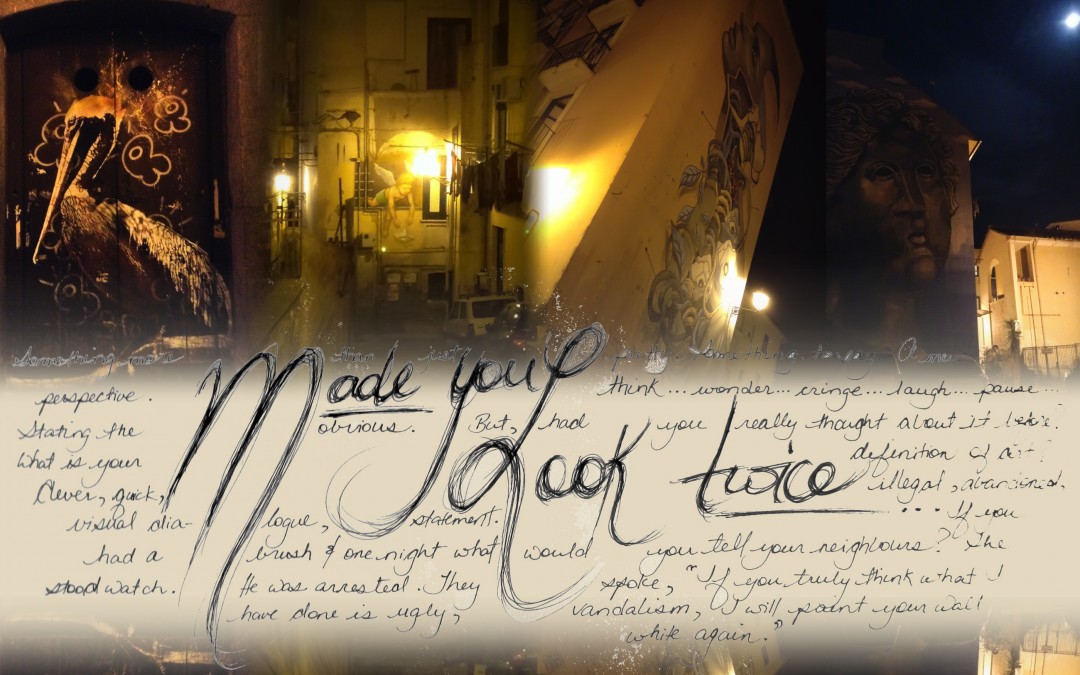 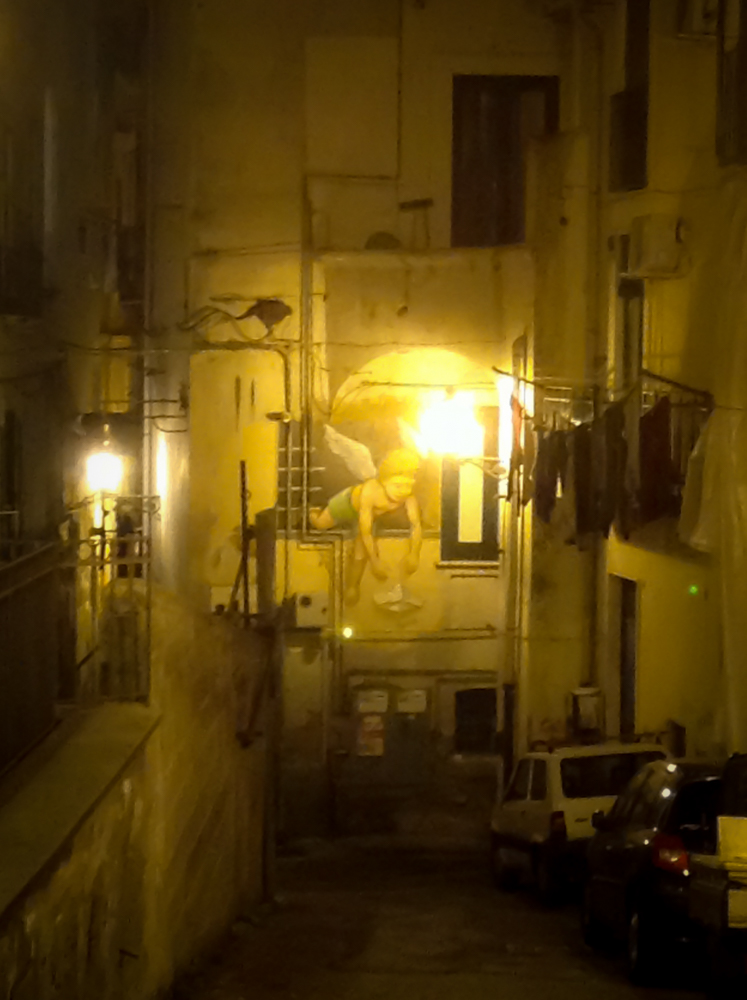 I spent one night in Salerno.

A stop meant as an in between moment, no expectations, it just happened to be where the next bed was after a day visiting Italy’s Amalfi coastline before continuing on to Rome. The bed, the ‘hostel’ it was in, and the neighbourhood it belonged to, were huge disappointments. I guess that means there was at least a minimum expectation after all.

Boredom prodded me out the door for a wander, a football game (soccer for the North Americans) kept me away from the bars and cafes and my feet moving. Winding through narrow streets I started noticing little bits of graffiti and street art. A trail of random images down one wall drew me into a hidden pocket of murals. 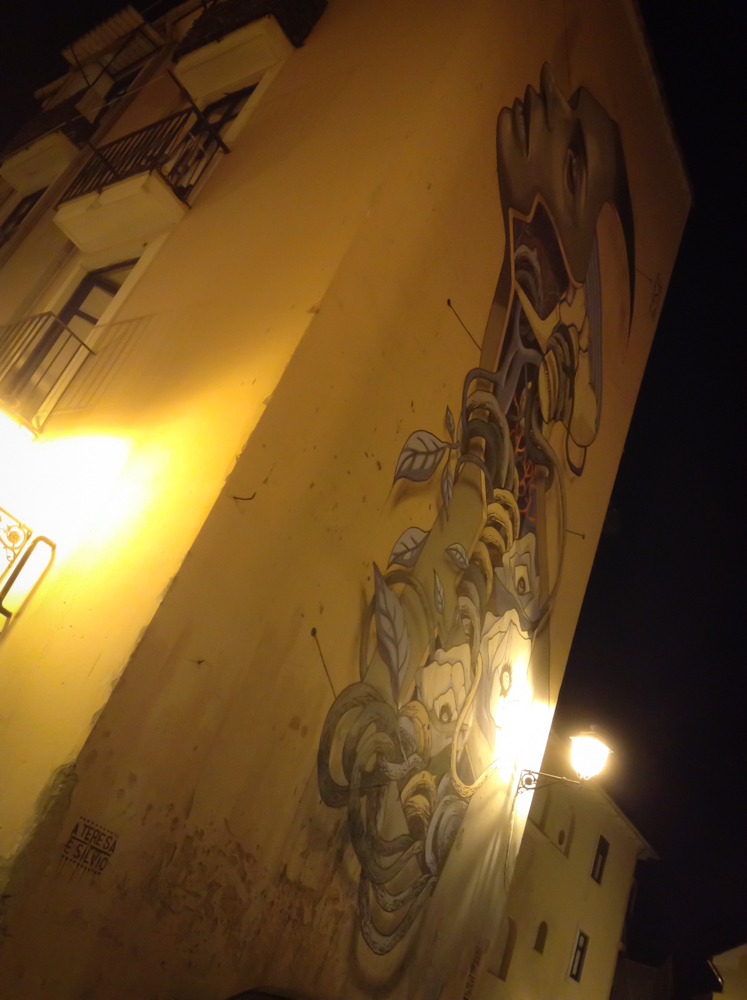 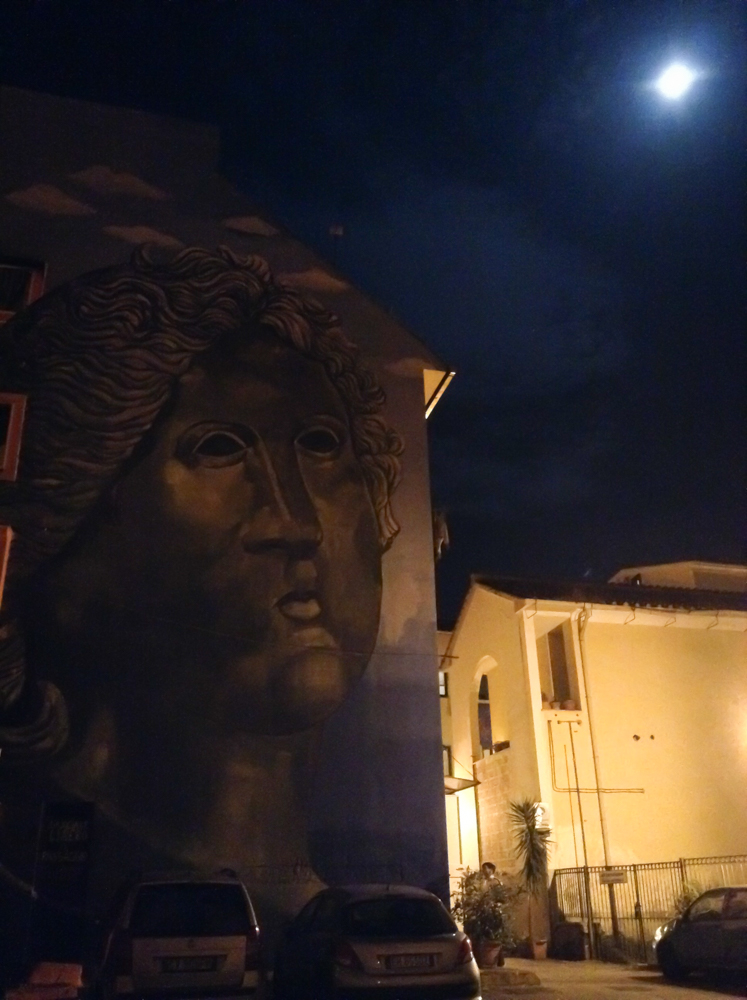 The buildings were certainly nothing special – run down, grungy, on the periphery of a more affluent area – but their walls had become canvases for explosions of colour and words of inspiration, one gallery leading to another.

I like street art. It is often raw and brutally honest, an unedited, living, breathing, open air museum of contemporary art with no admittance fees. Street art that makes me stop and look twice, whether to admire an anonymous artist’s skills or to ponder a social message, has a special value. These are not thoughts stored on canvas and hung on illustrious walls, on rotation from exhibition to exhibition between national galleries, to be written about in text books, analyzed, critiqued, and taught to budding art historians. 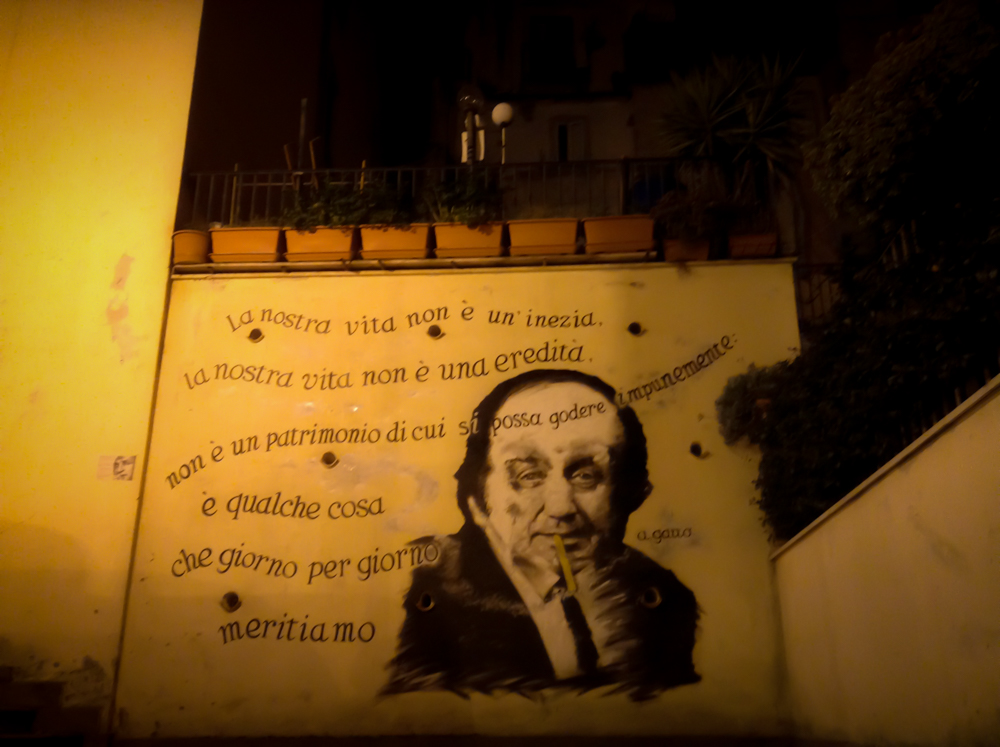 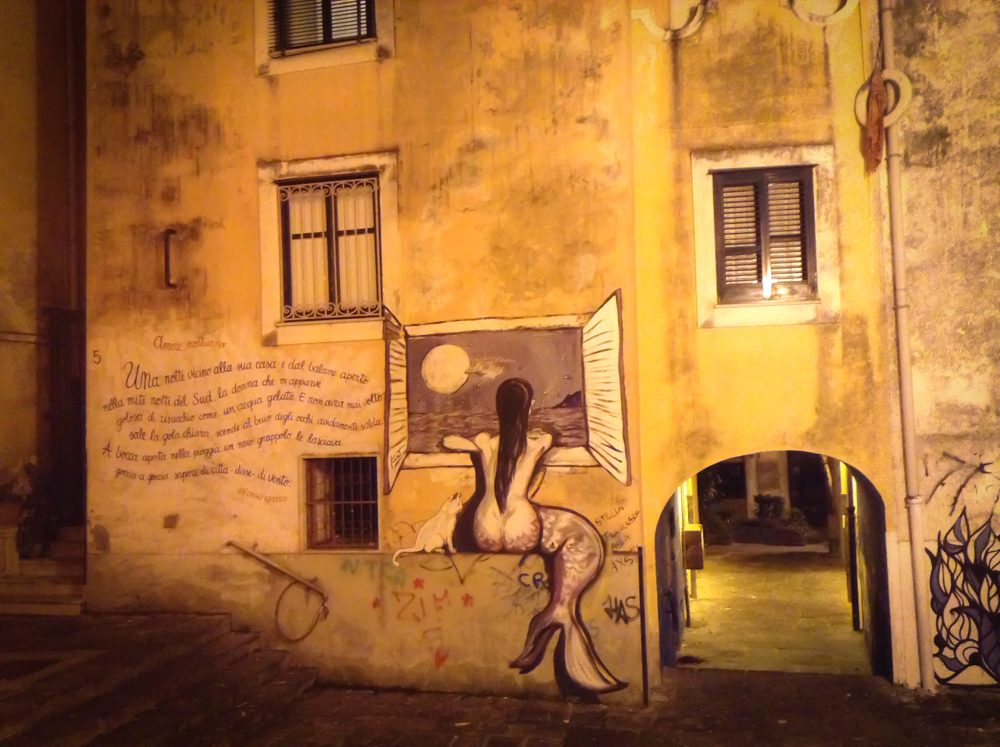 These feel more like private conversations between one human and another. 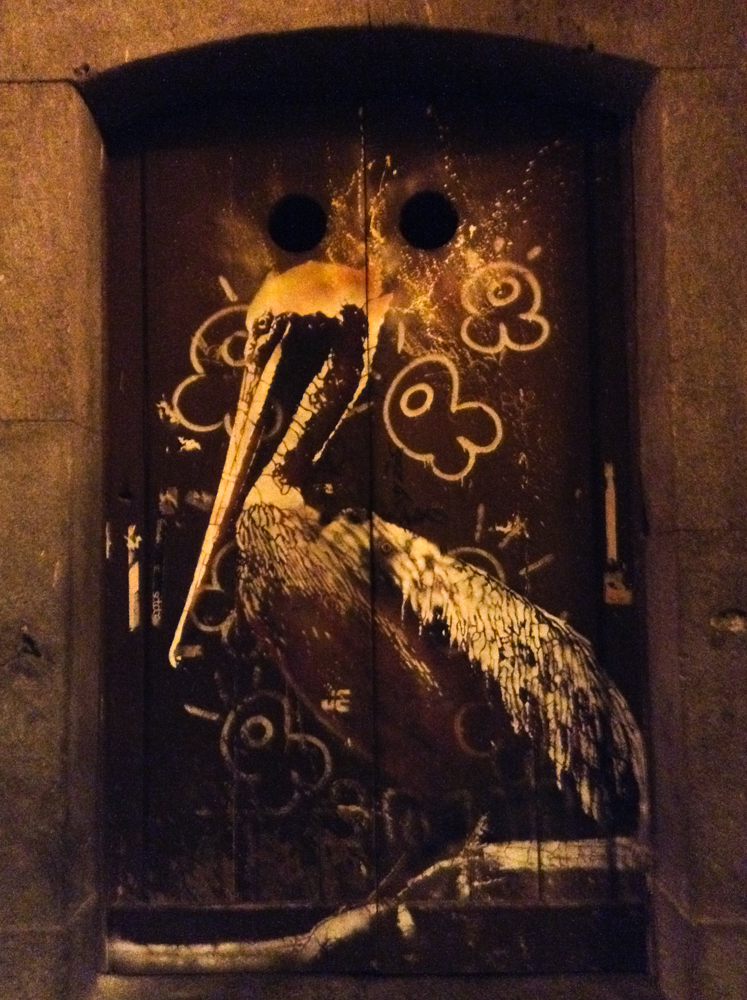 More recently I spent an evening sketching a bridge in Port, Portugal. A young man approached me and pointed at his camera, politely asking if he could take a photo. I always say yes. My interest in drawing had started to wane, butt cold and sore from sitting on concrete slowly seeping my attention away from the beautiful view in front of me. So I put my pen down and start chatting.

He is a graffiti artist from Greece. I get a glimpse of his work, flipping through images on his phone. Mention my love of street art, but I had not yet done any myself. He tells me about his experience getting arrested in his home town for painting a public wall. Instead of giving in to frustration or keeping his mouth shut and accepting justice as it was, he engaged the local mayor in conversation. He issued a challenge – look, truly look at what he had created. If the charge of vandalism was upheld, he would accept the judgment along with repainting the wall back to the original colour at his own expense.

Not only were the charges dropped, but other artists were invited to paint more walls. 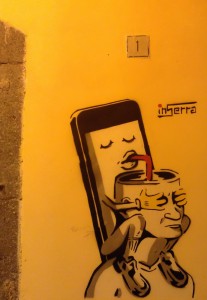 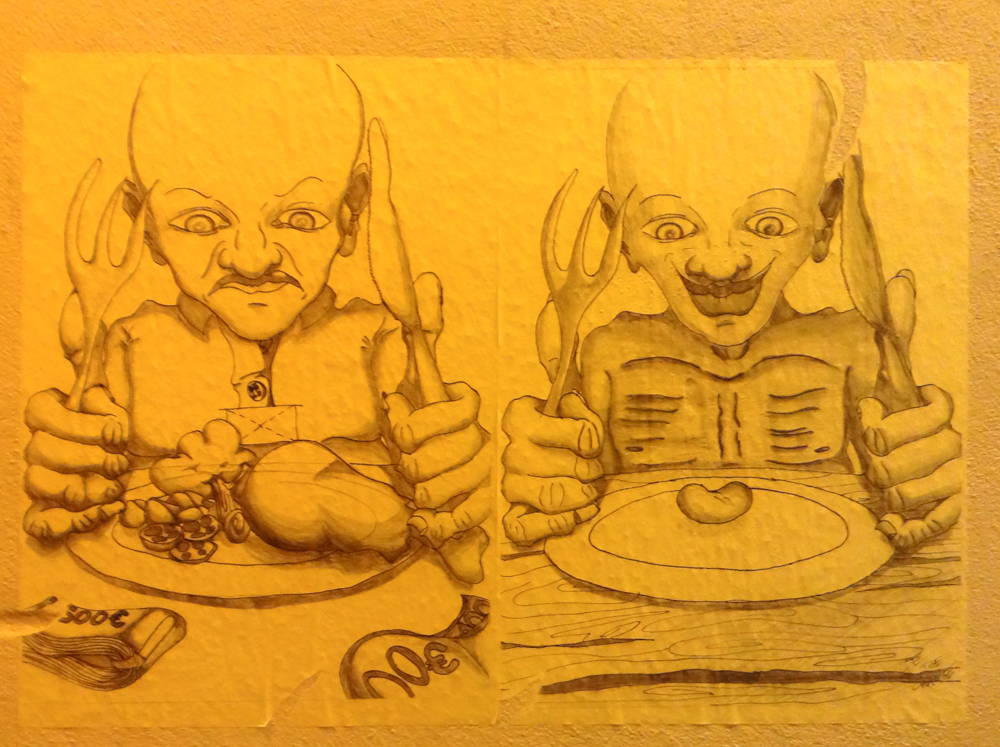 Street art had the power to turn a blah mid point between internationally renowned tourist destinations into a highlight of my time in Italy. It has the power to make us pause and think, to take us off guard, to open a dialogue between social groups, and bridge gaps between generations. Maybe I will find the courage to draw my own thoughts on a wall one day. 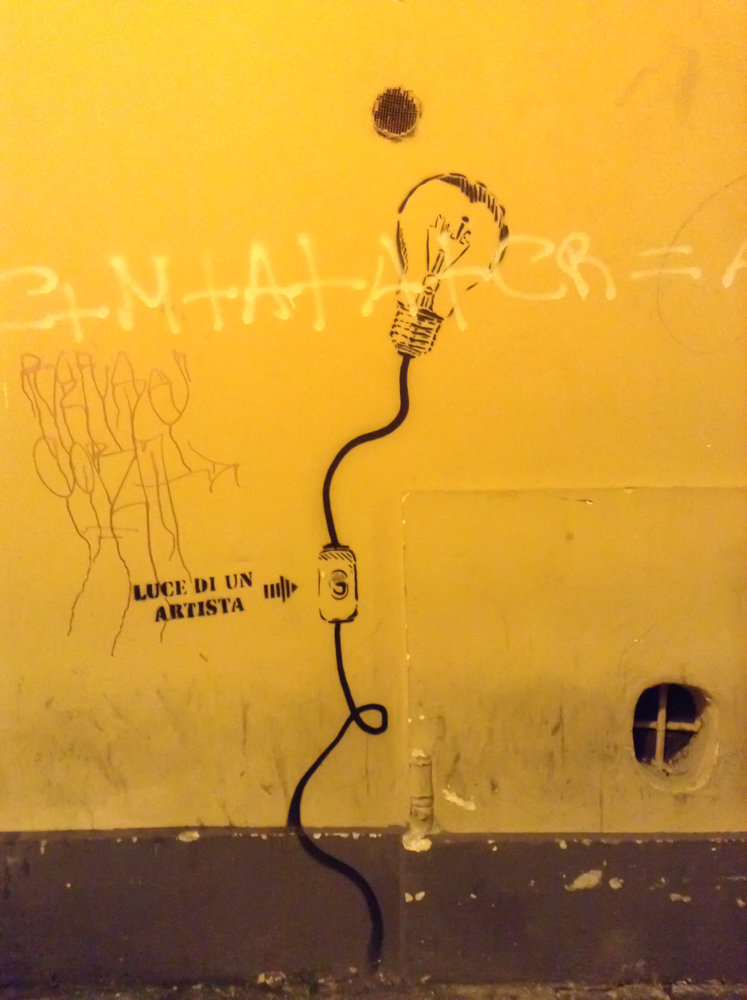